LET'S GET DOWN TO BUSINESS: What to Watch after the MULAN Remake

I wanted to do something different than review Disney's Mulan (2020), the remake of their hit 1998 animated film Mulan. While I watched and enjoyed it, there are plenty of people more qualified to speak to its merits as it relates to the culture and stories that it's trying to depict. My aim here is to offer some suggestions to people who watched it (or didn't want to drop $30 but have access to a streaming service or two) and are hungry for a bit more high-flying martial arts action in a roughly similar vein.

I'm going to go ahead and assume that most everyone knows about 2000's Crouching Tiger, Hidden Dragon and has seen Kung Fu Panda, and I'll try to include a couple (mostly) kid-friendly options along the way for any slightly adventurous youths who got their appetite whetted for a bit of wushu.

Read more »
Posted by The Norman Nerd at 4:51 PM No comments:

BILL & TED FACE THE MUSIC: A Fitting End to a Most Excellent Adventure

I don't know what's funnier or more delightful - the fact that the reappraisal of Keanu Reeves' work following his post-John Wick action resurgence led to a renewed appreciation for the Bill & Ted movies and his reborn star power finally led to a third film in the series, or that said third movie is. . . really damn good.

AVATAR: THE LAST AIRBENDER - The Kids Will Save Us, If We Let Them

Welp, since there still isn't much of a theatrical film industry at the moment, let's talk about a kids cartoon show that ended more than a decade ago.

Because why not?
Read more »
Posted by The Norman Nerd at 4:39 PM No comments:

I'm gonna assume everyone's already watched Hamilton on Disney+ by the time they read this, but. . . well, if you haven't noticed, but this year has been a little, uh, different when it comes to America, and it's hard to avoid acknowledging that, even (or especially?) on the country's annual Independence Day. We're in a, uh, period of years (a "term," you might say) where things have been decidedly worse on the homefront, and the combination of *gestures broadly at everything* makes even the celebration of a three-day weekend something with loaded context.

So let's avoid that but pretend that we're sorta addressing it by thinking of some vaguely 4th of July-appropriate films that are less on the mindlessly-jingoistic side.

And also that aren't Jaws, because - well, everyone already knows why. 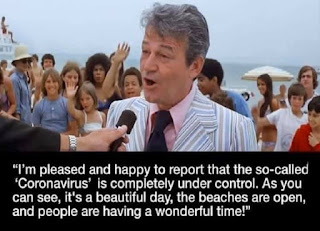 Look, I like making lists, and talking about unimportant bullshit isn't the worst coping mechanism.

Read more »
Posted by The Norman Nerd at 7:22 PM No comments:

She-Ra, Star Wars, and the Road to Redemption

Trust is hard to win and easy to lose.

Been thinking about that in various shapes for a while now - can't imagine why - but trust is a thing as worth earning as it is easy to break. Inherent dangers of oversimplification accepted, I feel like this comes pretty close to a universal truth for multiple contexts, because it happens with things as well as people. Just ask any Star Wars fan how they feel about various trilogies in the saga and their journey to looking forward to (or not) new films over the years, and what percentage of that may or may not relate to "fixing" issues with previous installments (The Force Awakens literally opens with the line "This will begin to make things right."). Losing trust isn't always an ending, but it means you have to do the work of getting it back.

So, how does this relate to the kids cartoon about the magic sword lesbians?

Like the title says, it's a road.
Read more »
Posted by The Norman Nerd at 8:01 PM No comments:

Me: "Well, I don't think there's any more abstract or inanimate object left for Pixar to make me cry over."